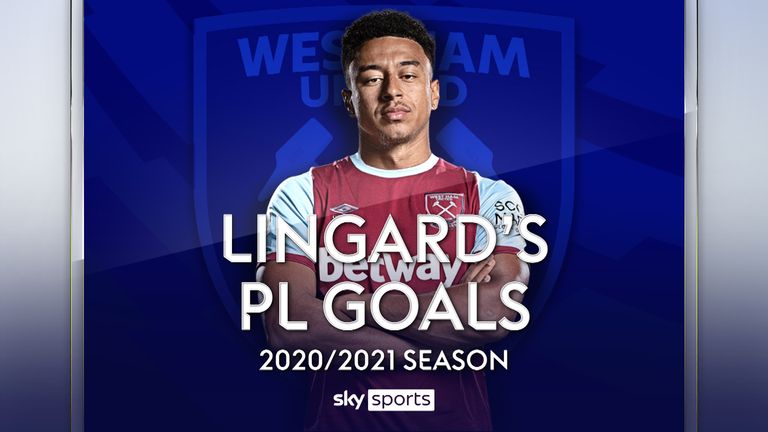 Take a look at all eight of Jesse Lingard’s Premier League goals so far this season following his loan move to West Ham from Manchester United.

Fresh from a 4/1 winner, our tipster Jones Knows thinks West Ham’s European push may stutter at Newcastle on Saturday. He’s eyeing another 4/1 shot.

How did we get on last weekend?

There seems to be a scary correlation with me being able to tip winners and the pubs being open.

Throughout the latest lockdown this column nosedived, frittering away +26 points of profit to leave me sweating a little on -5 for the season – albeit there were some close calls along the way.

December 15 was the last winner for readers of this column when Ruben Neves fired a shot on target for Wolves vs Chelsea – a time where in certain parts of the country you could enter a premises that served alcohol and legally order a drink. And what do you know, just as the pubs open their doors in April, the losing punting run is broken thanks to John Stones (to have a shot vs Leeds – he had four) and Ollie Watkins (to be caught offside twice vs Liverpool) delivering the goods to slam home a 4/1 winner. Drink it in!

I’m not planning on changing a winning formula, so I’ve followed suit with a similar price this week. But do check out my weekend preview prediction column where there’s lots of angles and prices to consider. There were winners, including a 5/1 West Brom shots angle vs Southampton, to feast upon last week.

Good luck, comrades. Remember, whatever I tip up here, I back. We’re in this together.

West Ham really intrigue/irritate me from a punting perspective.

Their current 55 points haul is their best return at this stage in the Premier League era – only once in their top-flight history have they had more after 31 games. David Moyes has played a blinder in the transfer market and they are 7/4 with Sky Bet to cap a remarkable season by qualifying for the Champions League.

Every week my punting instincts are telling me to take them on at the current match prices. Every week.

I’ve got a problem I think. An obsession with deeming West Ham are being overrated. It’s partly based on knowing Moyes’ risk-free style of management over the years will hold them back, plus, them not really passing the eye test with me – but it’s mostly about me concluding their recent run of results are unsustainable on the basis of the performance data.

The nine goals scored in their last three games have been amassed from an expected goal figure of just 4.83, much to the individual brilliance of Messi, I mean, Jesse, Lingard.

Unsurprisingly, West Ham’s shot conversion rate of 32 per cent over the past three fixtures is the highest amassed by any team.

And despite winning four of their last five matches, West Ham have actually faced the most shots on their goal of any Premier League team in that period (83), averaging out at a whopping 16.6 per 90 minutes. 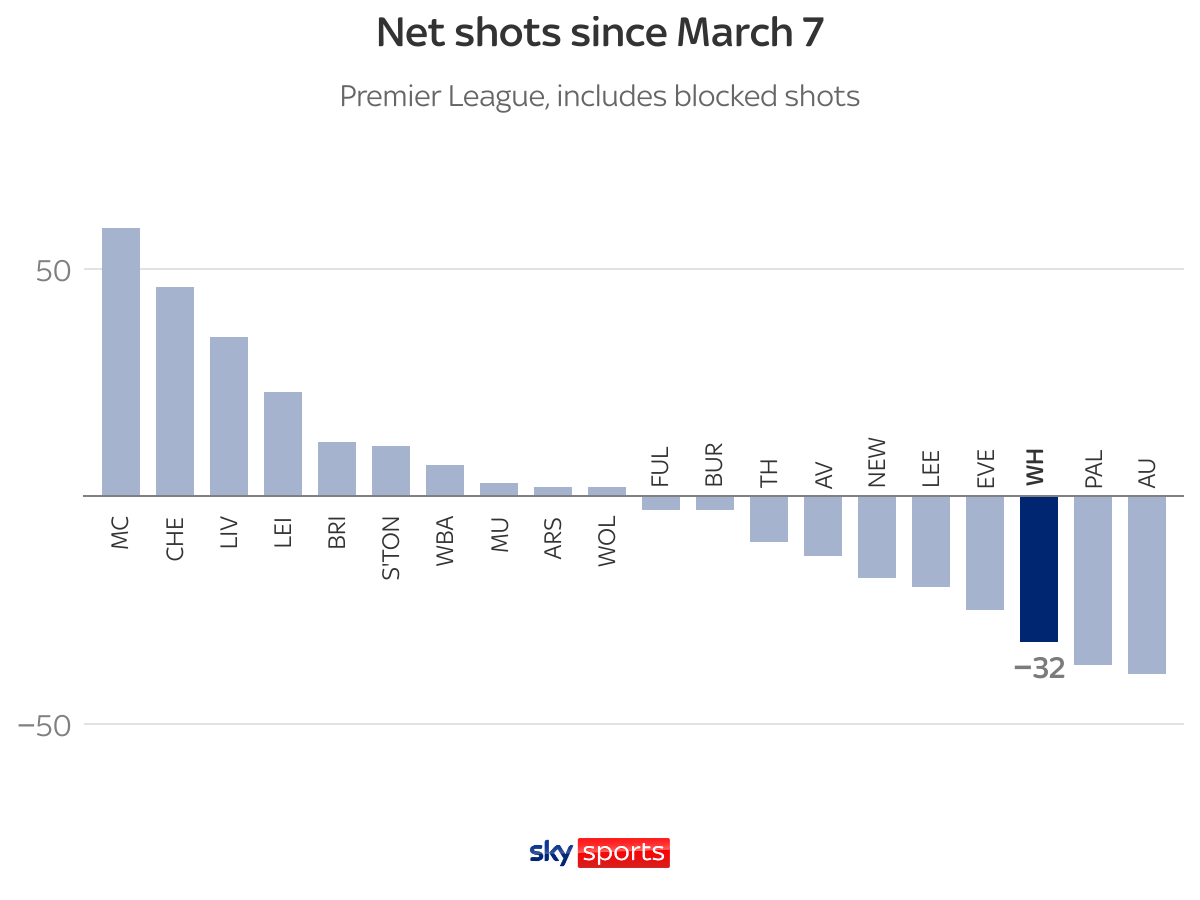 They can be got at.

West Ham are scoring goals at key moments in matches despite not creating clear cut chances. Fine margins can’t keep falling in their favour and at the prices I’m happy to row in with Newcastle this weekend, who should have Callum Wilson and Allan Saint-Maximin fit to play from the start. An upgrade which takes them from relegation fodder to a dangerous mid-table outfit.

With Saint-Maximin, Miguel Almiron and Wilson all on the pitch, Newcastle are averaging a whopping 14.9 shots at goal per 90 minutes – a huge increase on their overall average which is 10.9 per 90 minutes since Bruce took the job. Those three will give the Hammers a good workout and at the prices, Newcastle should be backed. Get on them to avoid defeat and have 15 or more shots at 4/1.

Jesse Lingard has instantly endeared himself to the West Ham fans.

The 28-year-old has made an electric start to life at the London Stadium since joining on loan from Manchester United in January.

Lingard has racked up an incredible eight goals and three assists in just nine Premier League games for the Hammers!

The 27-capped England international is absolutely adored by the West Ham faithful. He has completely transformed the way in which we attack as a team.

David Moyes will be desperate to get him signed up on a permanent deal in the summer.

Let’s keep our fingers crossed that that does in fact happen.

There would be such a buzz around the London Stadium next season if Jesse becomes our player on a permanent basis.

He is such an incredibly popular figure at the club. It’s amazing to think he’s only been with the Hammers for two-and-a-half months!

If he stays in East London, he may well go on to become a true legend at the football club.

Declan Rice posted a video of Lingard dancing today. And it made the West Ham fans love him even more:

Have something to tell us about this article? Manchester United manager Ole Gunnar Solskjaer says the club could have ‘selfishly’ kept Jesse Lingard but he ‘deserved’ game time after being loaned to West Ham until the end of the season.

West Ham United look to have missed out on appointing new director of football.

Hammers boss David Moyes has made it clear he intends to revamp West Ham’s recruitment structure.

West Ham wanted Bobic but look set to miss out

And he is currently untouchable at West Ham as he leads the club to what is shaping up to be their best season for 35 years.

It is unthinkable that West Ham co-owners David Sullivan and David Gold would appoint a DoF against the Scot’s wishes.

Therefore logic would suggest Moyes is in favour of such an appointment.

However it appears the man West Ham reportedly wanted is destined for elsewhere.

That’s according to journalist Nicolo Schira. The name will be familiar to West Ham fans as he is the reporter who first broke the news of the club’s record £45 million signing Sebastien Haller.

“Bobic and Eintracht Frankfurt have officially agreed to a parting of the ways.

If West Ham do bring in a director of football it will be the first official appointment to a role of that kind since Mario Husillos.

Husillos was brought in by Manuel Pellegrini in what is viewed as a largely failed experiment.

The Argentine was painted as a failure for his part in signing the likes of Jack Wilshere, Carlos Sanchez, Roberto, Felipe Anderson and Sebastien Haller.

While the first three cost West Ham nothing, the latter two proved expensive flops totalling £75m. The Hammers recouped £20m of that by selling Haller to Ajax in January but look unlikely to find any takers for Anderson any time soon.

But it must also be remembered Husillos was partly responsible for some superb acquisitions.

The likes of Lukasz Fabianski, Issa Diop and Fabian Balbuena were brought in on his watch and are key members of West Ham’s Champions League push.

Have something to tell us about this article?

West Ham captain Gilly Flaherty wants referees to become full-time in the women’s game and for matches being played in men’s stadia to be routine over the next decade.

All officials in the Women’s Super League (WSL) – coming soon to Sky Sports – and second-tier Women’s Championship are currently part-time.

In February, Joanna Stimpson, the FA’s refereeing manager for the women’s professional game, said the organisation has no plans to introduce full-time referees to the top-two tiers for at least three years.

But Flaherty, who was speaking on the 10-year anniversary of the WSL, says professionalism is vital to ensure improved officiating standards as the women’s game continues to develop.

When asked what she hoped for in the women’s game over the next decade, Flaherty told Sky Sports News: “I would like to see referees become full-time.

“I know they said recently that at the moment they don’t have any plans for it but, for me, you are asking players to be full-time and be professional and have professional standards. We are fortunate enough to do that.

“You have seen the growth of players from being part-time to being full-time professionals.

Flaherty, who was the scorer of the first-ever goal in the WSL when Arsenal beat Chelsea 1-0 in April 2011, won the WSL with Arsenal in the league’s first two seasons, while she later won the women’s top tier with Chelsea in 2015 and 2018.

Flaherty, 29, was part of history last month when Manchester United beat West Ham – as Old Trafford hosted a WSL match for the first time – and she hopes playing at large venues becomes a regular occurrence.

“Every team in our league is getting 2-3,000 a game,” she said. “That is still huge for women’s football. You don’t just want it to be the odd occasion where they are selling out.

“Chelsea, for example, against Manchester City at Kingsmeadow is sold out even now so you think where does that leave them in 10 years’ time. They will have to get bigger stadiums.

“It is good for us to be able to play at men’s stadiums because we get the exposure of the facilities, the pitch and the fans coming. But for me, I want to see in 10 years’ time that it is not made such a big hype about. I hope that it is just the norm.

“If you are 17, 18, coming through now, and playing football you have got so much in front of you, it is exciting.”

Sky Sports has announced a three-year deal with the FA to become the primary broadcaster of the Barclays Women’s Super League from September 2021.

As one of the most competitive leagues, with some of the most famous names and teams in the world, the WSL will be one of Sky Sports’ flagship offerings.

The deal will see Sky Sports show at least 35 games exclusively live per season and further strengthens the broadcaster’s commitment to women’s sport.